How do I know if my drains are blocked?

A blocked drain can be a real pain, and a huge inconvenience. You may already have a blockage and not realise, as they can often begin small and go unnoticed until they increase in size and start to make themselves known. It is a good idea to know the warning signs of a blocked drain so you can nip it in the bud before it starts to cause havoc in your drainage systems. 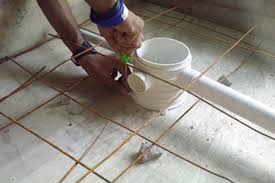 The most noticeable sign of a blocked drain is if the water is draining slowly. You will particularly notice this in your sinks and in your toilets. If the water is not draining as fast as usual, then it is likely that you have a blockage. In toilets, you may even notice that the water levels in the bowl are rising with each flush, which is a strong indicator that there is a blockage somewhere along the pipelines.

A blocked drain will never go away on its own and it is imperative that any blockage you come across must be sorted out immediately, so as to avoid letting the blockage create cracks in the pipes. These cracks can eventually lead to burst pipes or a collapsed drain, which will result in flooding. Flooding can cause a great deal of damage to your property, as well as posing a serious health risk, so it is always best to do as much as you can to avoid letting your drains begin flooding your home.

The smell of the drains is also an indicator of whether there is a blockage or not. A buildup of waste in the drains will give off a foul odor which you may begin to notice. This sign is most commonly spotted in the kitchen, where food may have been flushed away down the sinks rather than thrown away in the bin. Food substances that are fatty, greasy or oily do not break down at a rate fast enough to be flushed through the drains smoothly, and they are more likely to stick to the walls of the drains which is where a blockage will begin to form. If these food substances are continually flushed down the sinks then any blockage that has begun to form will grow in size and can cause a great deal of problems. To avoid causing a blockage in your drains, make sure to properly dispose of all food substances in the bins. There are also small steps you can take to ensure that you are not faced with a large blockage, such as pouring hot water and baking soda down the drains.

A blocked drain will also make a strange sound when you try to flush water down it, which can be another sign that there is a blockage that needs dealing with. If you have tried to flush water away and noticed any gargling noises, or noises that do not sound familiar, then you may be dealing with a blocked drain. Make sure to act as soon as you notice the problem, before the blockage can increase in size and cause more chaos.

With any blockage, you must take action quickly. It doesn’t take long for a small blockage to grow and start damaging your drains, so to save yourself time and money it is always best to call a drain technician as soon as you come across anything troubling.